Am I too tall for Disneyland or Disney World?

With our little kids, we are always measuring and checking to see if they are tall enough to ride some of the big rides like Space Mountain. If you are looking for the minimum height requirements check out these guides I made for Disneyland and […] 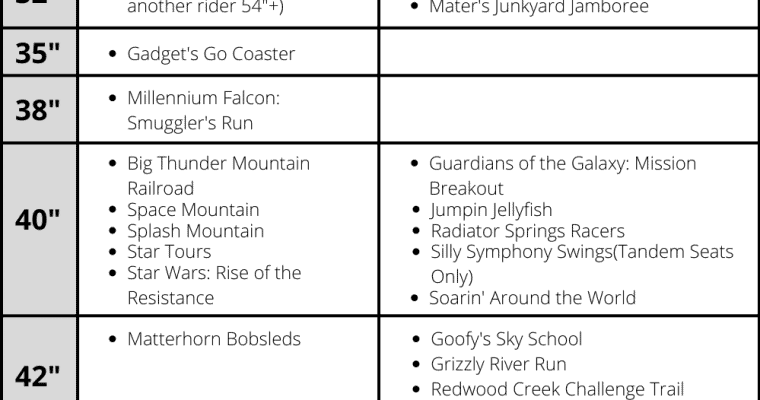 So often I find myself Googling how tall Beckham has to be to ride certain rides at Disneyland. I CAN’T WAIT to take him on Big Thunder Mountain and the Matterhorn! He has this fascination with Splash Mountain (soon to be Tiana’s) and I just […] 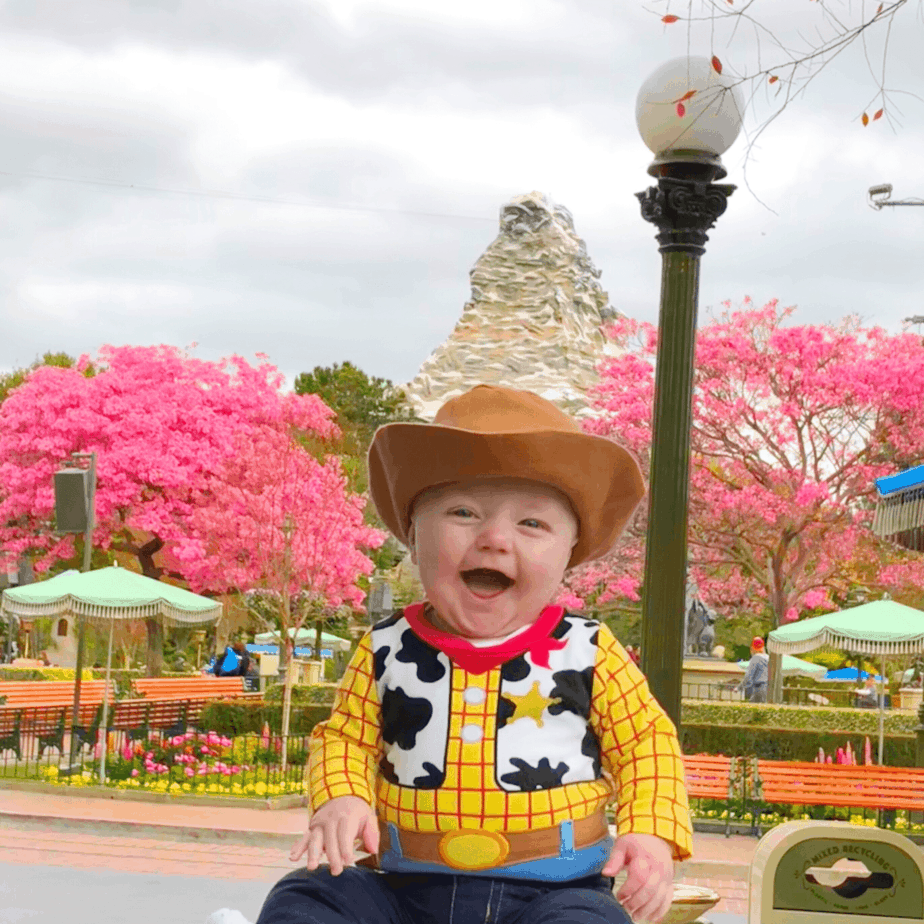 I have compiled several trivia questions and answers about the different Disney Theme Parks around the world. For a printable copy of these questions click here.

Before Walt Disney World got its name, what was it referred to as?

What date did Disneyland open?

What is the fastest ride at Walt Disney World?

What is the monster inside the Matterhorn’s name?

What is Disney World’s Slogan?

The Most Magical Place on Earth

What is the most popular souvenir from Disneyland?

How much was Adult Admission to Walt Disney World on opening day in 1971?

What does EPCOT stand for?

What is the fastest ride at Disneyland?

Splash Mountain, on the final drop you can reach speeds of up to 40MPH

What is the tallest ride at Walt Disney World?

What was the last attraction that Walt Disney personally supervised before his death?

Pirates of the Caribbean

What was the first international Disney park?

What is special about all the plants in Tomorrowland at Disneyland?

They are all edible

What year did Tokyo Disneyland open?

How long did the construction of Disneyland take?

1 year and one day

Which Disney park does not have a Winnie the Pooh themed ride?

How much did Disneyland cost to complete?

Which two Disney parks have an Alice in Wonderland themed maze?

Which ride has the distinction of being placed in a different land in every Disney park that has it?

What is the name of the land you first enter in Shanghai Disneyland?

Which Disney park does not have an It’s A small world ride?

How many times has Walt Disney World been closed since it first opened?

It has been closed 4 times. Hurricane Floyd closed the park in 1999. The terrorist attacks of 9/11 in 2001 closed the park as well as a 2002 power failure and finally the Covid-19 current shutdown.

In Disneyland’s Fantasyland, there are two rides that have mermaids. Which two rides are they?

What is the most expensive Disney attraction?

Rise of the Resistance

What is buried within the castle at Disneyland?

What is the oldest item in Disneyland?

A petrified tree that Walt gave Lilian for their anniversary 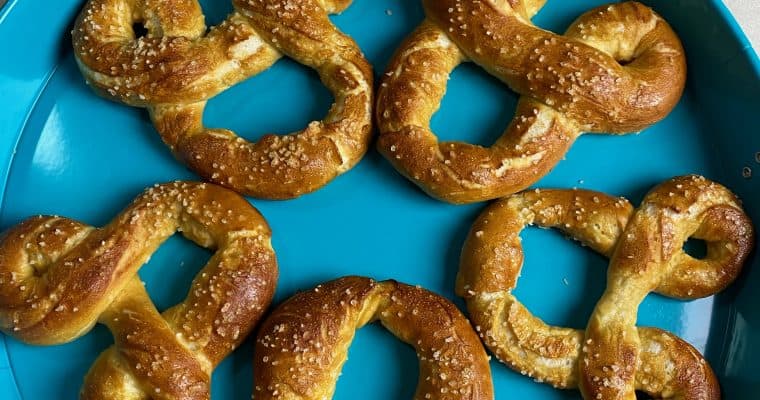 Everything tastes better in Mickey form, right? Say hello to the yummiest, easiest Mickey pretzel recipe out there. These taste so delicious and they’ll make you feel like you’re at Disneyland sitting on Mainstreet, USA.  Ingredients To Make Mickey Shaped Pretzels 1 ½ c lukewarm […] 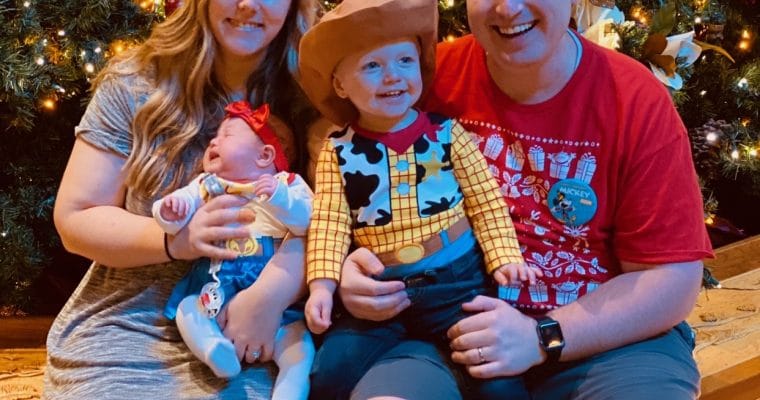 How We Budget For Disneyland Using Personal Capital

Easy and Healthy Snacks to Pack for Disneyland

I will be honest Disneyland has some of the most delicious snacks. They have churros, ice cream, pretzels, turkey legs, corn dogs, popcorn and so much more. However, the fact that most of these Disneyland snacks start at around $5.00 and just go up from there, eating these snacks all day can add up very quickly.

The good news is Disneyland Resort allows you to bring in outside food and drinks. So I highly recommend you bring a few of your own snacks to keep your stomach and wallet full, while still being able to enjoy a couple of the fun Disneyland Resort treats. If you would like to learn some ways to budget for a Disneyland trip check out this post I wrote about planning a trip to Disneyland.

So what snacks should you pack for Disneyland?

I have divided the snacks for Disneyland into those requiring no prep, no prep with a cooler and snacks that require a little big of prep time.

Disneyland snacks with no prep and no cooler needed

Disneyland snacks with no prep but a cooler is required

As you can see there are so many easy and delicious snacks you can pack for your day at Disneyland Resort. Packing a few of these snacks everyday will help you save some money that you can then use to buy more of the yummy treats Disneyland has to offer. Do you have a favorite snack to pack for Disneyland? Let me know in the comments below. 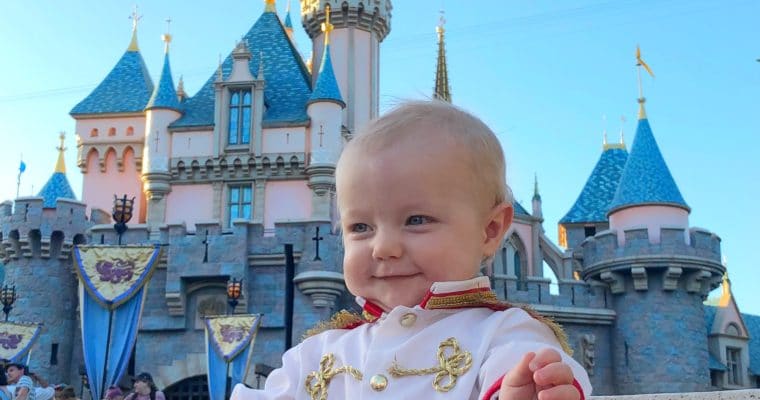 We are Annual Passholders to Disneyland from Utah. Because of this, we are often asked how we plan our trips. The secret really is in the planning ahead. There is nothing better than an impulse trip to Disneyland, but in reality, these trips do take […] Tips for Taking Your Tiny Baby or Toddler to Disneyland

The most common question/request we get is asking for tips for taking tiny babies or toddlers to Disneyland. Hamm’s first trip to Disneyland was in October 2017 when he was a little less than 2 months old. Although he will never remember it, we took […]

Disneyland Attractions with No Height Requirement